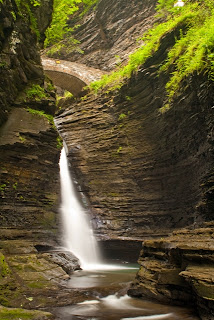 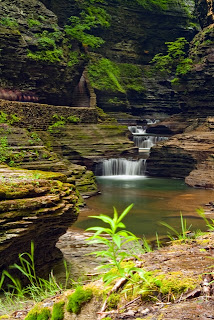 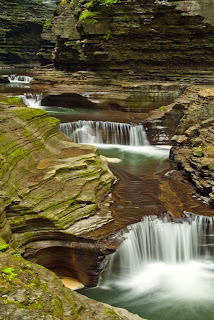 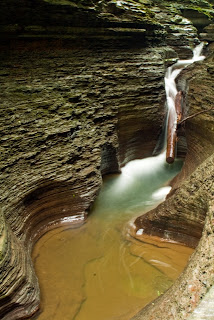 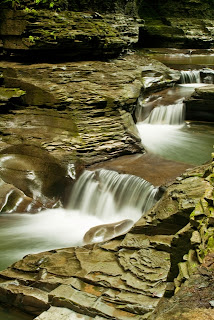 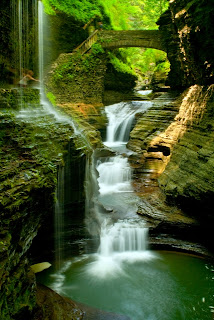 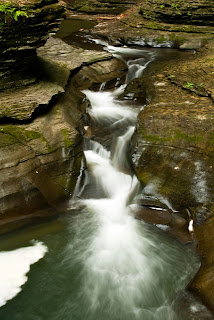 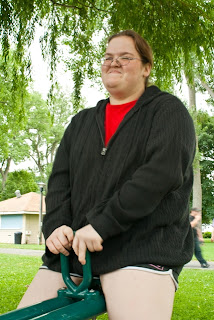 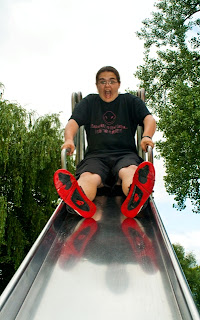 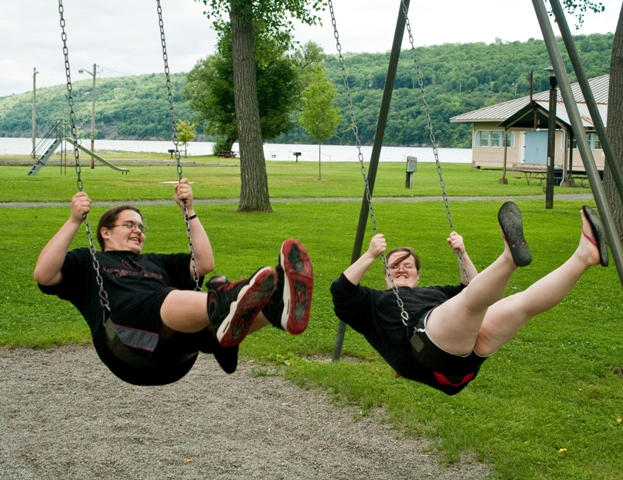 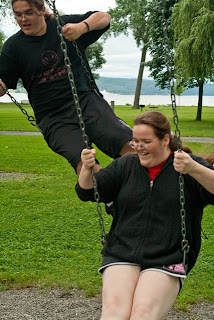 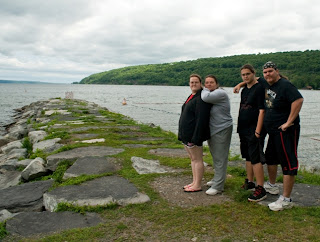 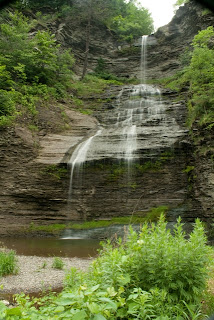 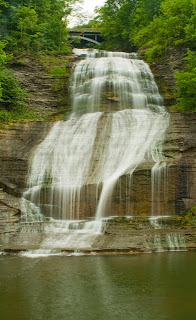 While hiking The Gorge Trail at Watkin's Glen, one can't help but marvel in the sheer power of it all.  You look up to see cliffs of nearly a hundred feet, and possibly more, all carved from the power of this mighty river that flows so majestically down the different steps and cascades.  Anyone who is a lover of nature would be happy to stay at Watkin's Glen for months on end.  I know I can't get enough of it.  It's now my favorite waterfall place to be, surpassing the once favorite Rikket's Glen.

The trail is a medium level intensity hike.  We had no problem with it.  The steps of the trail are kept in great shape, unlike Rikket's.  My only negative criticism about the place is that they are lacking in litter control.  Everywhere we stopped to take a break, and just enjoy whatever particular fall we were looking at... we had to clean up where we were.  On an editorial note, I find it disgusting that anyplace like this would have to have people clean up after the visitora to begin with.  I am quick to remember the old commercial of the Native American man, who cries at the sight of people littering out their car window, on the highway.  If that got him upset, seeing tons of beer bottles, cans, cigarettes and wrappers of all kinds, littering this place of immersurable beauty, would give him a stroke.

At one point, I hopped over the wall to get down further into The Cathedral Fall.  I know you're not supposed to, but I wasn't going to be happy with the same touristy photos of Watkin's that I'd seen a million times.  I needed a better perspective.  I doubt I'm the first to have done it, but I still needed a bit more creativity out of my shots than the same angle from the trail that anyone can get. While I crossed the creek, and hiked up the side wall to the base of the fall, I was disgusted to see the amount of trash that littered the entire area.  This place must take in tons of revenue every day.  WHY they can't pay someone to pick up after the idiots who are forced to litter the place up, is beyond me.  It was sad.  I sent my son back over the creek to bring me back some bags.  We always bring plenty of shopping bags with us on hikes.  Mostly to pick up trash we encounter along the way, but also to protect the cameras in wet situations.  I was sacrificing that protection now, to use strictly for trash removal.  I filled three bags with crushed cans and bottles that I picked up along the creek, and some in the shallow waters of the basin.  I know it was barely a dent in the huge amount of litter that scarred this gorgeous area, but at least The Cathedral was now clear of any debris, for at least a day.  :)  I'm not trying to pat myself on the back, but I really can't understand why EVERYONE doesn't feel the way I do about nature, and preserving its beauty?  If everyone would bring a bag of some type with them, when on a hike, and pick up a little trash left behind by the assholes who DON'T appreciate the beauty of nature, places like Watkin's Glen would be nearly pristine.  Okay, off my soapbox.  :)

Continuing along the gorge trail, the sun finally began to show it's face.  We'd managed to get a lot of good shots on the way up, so I wasn't too upset about it.  We got to the top, and took a nice, relaxing break at the park.  We enjoyed some ice cream after kicking off our hiking boots and letting our feet breathe and relax a bit.  After about an hour of relaxion, we began our way back.  With the sun shining so strong now, we decided to take The Indian Trail back instead.  It's not right along the gorge, but has many nice overlooks along the way.  It also has a huge suspension bridge that goes 80 feet over the river, which I was NOT looking forward to.  I thought I'd be taking a detour back to The Gorge Trail at the point of the bridge, but I'm dedicated to overcoming these two phobias of mine.  Fear of heights and spiders has long overcome much fun in my life.  Living and working at a campground has brought me into the most day to day contact with spiders I've ever had.  I like to think I'm making progress with that battle.  I no longer shriek like a little girl and dance around in a fit, when I see one.  Now, I just dance in a fit if one gets on me.  Definitely getting better.  :)  As for heights... not as easy to fight.  I get the shakes just getting on a ladder, so crossing this bridge was NOT easy for me, but I managed to do it.  The bridge was far wider than I thought it was, and the slats of wood were much closer than I originally thought they'd be, so it was easy to just look forward and get the job done.  Had I looked down, or over the edge... I may have panicked. If that had happened, I would have probably frozen and I have no idea what it would have taken to get me off the bridge.  Luckily that didn't happen.  :)

After the hike was done, we had lunch in the parking lot, and headed back to the campground.  The campground at Watkin's is also gorgeous.  Big, beautiful sites abound.  Again, my only complaint would be the high amount of litter.  I might also add that the bathrooms were definitely subpar.  After working here, at Canyon Country Campground, where the bath houses are as immaculately clean as one's own house, it takes me back a bit to see webs and dirt all over a bath house.  Since it IS camping though, I can overlook it for a few days.  :)

We went down to the pool for a nice swim to cool off from the now brutal heat.  Luckily we got in for about a half hour before the sounds of thunder were heard in the distance.  The staff immediately got us out of the pool and we headed back to the campground and back to the van, to nap during the downpour.  And nap we did.  The rain lasted for hours, and so did our slumber.  We probably slept for about three hours, to awake to the sun creeping back out from behind the clouds, just in time for dinner.  Even with the moisture, we managed to enjoy a delicious dinner and a nice campfire before retiring for the night once again.

Even after getting a nice long nap in, all four of us were asleep as soon as our heads hit the pillow.  We switched things up the final night, with Ceej and I taking the bed and letting the twins have the front seats.  They were much more comfortable in the seats than I was, but they're a bit smaller than me, so it kinda makes sense.  I got a great night's sleep in the bed that we had slept in for two and a half months, on the first leg of Jones's Journies, last fall and winter.  It was nice to reminisce a bit, but I wouldn't trade my camper's bed for anything now.  :)  We got up kinda early, broke camp and made our trip back to Scranton, Pa. to drop off the kids at their house.  Along the way, we found a few more waterfalls that we stopped and enjoyed for a minute or two.  I'm including a few shots of them in this blog as well.

As always, I hope you enjoy the pics.  If anyone has any questions about where we've been, where we're going, how we live this way, questions about campers, campsites or anything in general... ask away.  :)

Ken and Carol
We're a couple that have been together for seven years now. We'll be celebrating our 2nd wedding anniversary in June. We have five children between us, ranging from 17-25 yrs. old. We've both loved the outdoors and camping since we were kids, but never had the chance to do it as much as we'd have liked. Now, due to a huge change in our career status, we've decided to make a huge lifestyle change. Embarking on a journey of living full-time in our trailer, and pursuing a new career in photography for the both of us.